Bullying by Exclusion: He Says, “She Says I Can’t Play!” 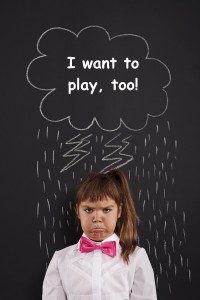 Journal entry 1995 by Susan Fitzell:
Before I began teaching my conflict resolution lesson at

[the elementary school] today, Mrs. [classroom teacher] told me that the children had a question for me.  They had been doing a realistic role-play, in reverse.  There have been problems on the playground with boys wanting to play jump-rope.

Two things were happening;  1) The girls won’t let the boys play, or 2) the boys play and other boys make fun of them for playing a ‘girls’ game.

I addressed the latter the last time that I was in the class by telling them that one of the ways boxers train is by jump-roping.  Boxers are far from feminine.  We discussed other activities such as cooking, house cleaning, taking out the trash, football, ballet, etc. that have gender stereotypes attached to them.  That seemed to help them.

Today, the problem was that the boys were role-playing an incident that happened at recess.  The boys were jump-roping.  A group of girls wanted to play.  No matter how hard the girls tried to get the boys to let them play, the boys held their ground and would not let the girls in.

The question was, what do you do when, no matter how hard you try, you are not let in?  We talked about what was fair.  Was life fair? Maybe this was a time to ‘walk away’,  get their own jump-rope and play by themselves.  We talked about whether we could make  someone do something that they did not want to do.

Is Social Exclusion/Bullying By Exclusion on the Playground Trivial?

These arguments often seem petty to adults in the context of children’s play.  I think that adults forget the powerful emotions around the issue of bullying by exclusion.  Adults are often excluded in various ways in life but, in an adult context, it seldom feels trivial.  An adult may be left out of a promotion, a business meeting, a family or neighborhood event.  Because the issues are in a ‘real life’ setting,  it is difficult to relate feelings that erupt from adult social exclusion to bullying by exclusion of children at school. Well, I had an experience that brought this awareness home to me at a “kid” level.  I find that it is difficult to even admit my feelings and write about them, because of the many messages I received all my life that “these feelings are petty, silly, not valid.”

Social Exclusion in the Adult World: Is it Trivial?

There was a woman in my martial arts class who I’d known  for at least a year.  Outside of  general courtesy, she had never extended a hand of friendship towards me during our time in class together.  This was fine because there were other women in the class that I related to well and felt comfortable with.  However, the issue became emotional for me when this woman, one of the few who liked to spar (practice fighting/kickboxing), excluded me continually as a sparring partner.  If there was no one else to spar with, she simply would not spar, leaving me with no one to spar with either.  We sparred together once because the instructor put us together.  She was much better than me in the ring and had told me that she liked to spar with “so and so” because she was the only one close to her level.  She would also spar with men.

I was not ready for the anger and raw emotion that finally erupted in me on a night that I showed up wanting to spar and was excluded once again. Sparring only occurs when there are people available to spar and an instructor there to supervise.  Consequently, there were  times when it was not held.  Also, there are times that sparring is pre-empted by private lessons or preparations for upcoming competitions. During the scheduled sparring time, called Fun Spar, this woman put on sparring gear.  She got into the ring and was preparing to spar with a young man.  When I asked if they were having “Fun Spar” that night, I was curtly told, “I wouldn’t call it fun.” She didn’t look at me.  I was completely ignored. The message was loud and clear; you can’t play!

What my intellect understands about people who behave this way, and what my heart feels when they do, did not gel in that moment.  I felt what those kids on the playground felt.  I felt what the excluded child feels.  My inner child hurt.  I was left out of an activity I loved at the whim of  another person and an instructor who did not hear or ignored the interaction.

I speak of bullying by social exclusion in my conflict resolution lessons with children and adults.  I was out of touch, however, with how deeply it can hurt, and with the anger it can provoke.  Now, when children come to me with complaints like “Johnny won’t let me play!” or “Jane says I’m not good enough to be on her team.” I have a better  understanding of the pain bullying by exclusion creates.  I am able to sincerely validate those children’s feelings and I can help kids work towards solutions to exclusion with a clear understanding of the issue on a gut level. As far as I’m concerned, “You can’t say, you can’t play!”