Recently I was speaking with Claire, the mother of one of my son’s friends. Claire and I have common views on parenting. Claire has two sons; I have a daughter and a son. Our children are about the same ages. While sharing beliefs and concerns about parenting in today’s world, we acknowledged a common fear. In raising our children in an environment free of media violence and typical stereotypes (as free as we are able, given our humanness and society’s influence), were we creating children who were ‘different?’ How would being ‘different’ affect our children? More specifically, how would it affect our sons? 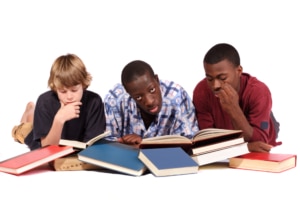 It was reassuring to me to see Claire’s boys and to speak with her about common concerns. I had begun to have a few doubts and felt that maybe I was doing my son an injustice by rearing him with an awareness of stereotypes and a minimum of media violence. I noticed a common ‘difference’ between our children and others. Our children were gentle. In a culture that holds up aggressive, macho males as the masculine ideal, could the ‘gentle’ man survive with self-esteem intact? I thought that my son’s love of beauty and aesthetics in his surroundings and nature were nurtured and encouraged because he had an older sister. There were no sex-stereotyped boundaries drawn in his dress-up play. He was not physically aggressive. I’d see him with other little boys and notice an obvious difference. I didn’t worry until the time when he was playing with a male friend and was reduced to tears because he chose to play with a toy that his friend disdainfully called “girlish.” The scene broke my heart. Was I doing the right thing? I started to talk to my son about American culture.

There was little difference between the gentleness in Claire’s boys and the gentleness of my own children. Her five-year-old had an older brother. My theory that my son was gentle and a lover of aesthetics because he had an older sister went out the window. Claire had the same concerns as I. She knew she was raising children who were ‘different.’ We discussed the ramifications of our choice to raise peaceful children. We considered the price our children would pay because of our beliefs. We decided that the cost of allowing them to be raised with acceptance of media violence and sexual stereotypes would be greater. She was considering karate lessons for her older son so that he would have the confidence ‘not to fight,’ but also the skill to defend himself if he absolutely needed to. My children both take karate for the same reasons. This choice was reinforced in one of my workshops when a mother described how her son, whom she had brought up to be peaceful, was being bullied by other boys who did not have the same value system. Confused and distraught, she questioned her choice because she felt it set her son up as a victim.

I remember a conversation with another mother of a five-year-old boy. Sharon recalled a time when she had not yet heard of Power Rangers. She had managed to protect her child from Ninja Turtles and felt good about that accomplishment. At her son’s fifth birthday party, however, Power Ranger products were the gift of choice. Not knowing anything about the show, she started to watch it with her son. It didn’t seem quite so bad. After all, it had a moral at the end of every story. It eventually became an acceptable pastime in their home. She was torn between her personal beliefs, the popular attitude that “It can’t really hurt them,” and a key comment her son had made. He shared with her that he was happy he had Power Rangers. Now he wouldn’t feel left out. She was struck by the fact that her five-year-old had already experienced the exclusion felt by kids who are ‘different.’ She was in conflict. She did not want her son to feel excluded or ‘different.’ I could see her dilemma. As she spoke with me, I could sense her mixed feelings: her need to defend her choice to allow Power Rangers in her home and her guilt at doing so at the risk of some vague possibility that it could have a harmful effect on her child. What does a parent do?

My husband and I did not buy my children Power Ranger toys. They have not watched the show in our home. We did not, however, forbid them to watch the show when at friends’ homes. When they received Power Ranger toys with a fast food kid’s meal, we allowed them to keep them. We walk a tight line between allowing them to do things other kids do and keeping with our values. We don’t want the backlash that comes with forbidden fruit. Instead, we talked to our children about how Power Rangers solve their problems. We used language they could understand to discuss how commercials sell toys and how toy companies try to make a lot of money regardless of the cost to children’s development. We spoke to them about what really happens when people are kicked or punched. We talked to them about how the families of the ‘bad guys’ might feel when their children or siblings are killed. We conceded and bought Batman toys without guns. We also found a video of the original movie: the one we watched as kids. (Yes, that movie is hokey and unsophisticated; however, my kids enjoyed it. Children don’t need the sophistication and violence present in today’s shows.) Hopefully, we can find a balance in a world that presents thousands of violent images to children each week.

Understand that I am empathetic to the plight of parents in our culture. There is so little support for parents attempting to buffer their children from the violence in our world. On the contrary, there is tremendous pressure to give in and conform. Much of this pressure is subtle. It comes in the form of facial expressions, body language, and comments that tell us we are silly to be so concerned about the toys our children play with and the shows our children watch. After all, we watched Bugs Bunny and played with guns when we were kids! Parents who believe media violence won’t hurt their children may feel judged and defensive when confronted with arguments against media violence and stereotypes. Another obstacle to overcome in our busy, fast-paced world is the lack of time to reflect on our own attitudes and conditioning. Society sends out so many mixed messages affecting how we think that we may not be sure about what we believe. Until we know who we are and where we stand on these issues, we cannot give clear messages to our children about conflict, violence, or gender stereotypes. Once we know where we stand on these issues, we can begin to educate our children. If they are ‘different’ because they are peaceful, we can feel confident that we did our best to stand by what we believe is right.

For more information about conflict education and caring communities, see Susan Fitzell’s book, Free The Children, Conflict Education for Strong and Peaceful Minds. Available in both print and electronic versions!