His face was two inches from mine. He was screaming at the top of his lungs. His words bit into my being and stung without remorse. I was testing for my green belt and I was the target. I had heard that this happened. I was told that during each test, one or two students were picked to endure excessive abuse. No one knew what the criteria would be. It just was. I made the first mistake. I was the chosen one. From that point on, nothing I did was good enough. I must have done one hundred push-ups. The push-ups were easy. It was the words, raging words, humiliating words endured before my peers that caused me pain. I was told I had a weak mind. It went on for an hour and a half. I considered walking out, but that wasn’t my style. I would meet the challenge. I would not break. My voice might waver, but I would stand strong. And I did. What I did not realize was the price I would pay afterwards.

Like Jeckyl & Hyde, when the test was over, he smiled at me, said, “Good job!” and handed me my new belt. I didn’t feel good. I felt defeated. I blamed myself. I had been working extra hours on the computer to complete work for my business. I knew that I had not been eating well or sleeping enough. I was tired. My responsibilities as a business owner, teacher (I was doing summer testing for my school district), parent, and wife had taken time away from my martial arts training. So in some way, I felt I must have ‘deserved it’. 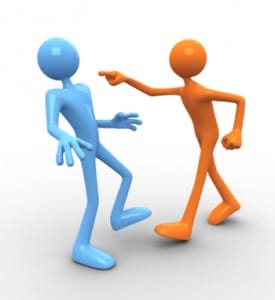 For three weeks after, I would wake in the middle of the night with nightmares. I would wake with him screaming at me in my mind’s eye. I barely ate during those weeks. I lost eight pounds. I tried to make sense of the situation and my feelings. I finally asked him about the test. I asked him why? He said I did very well during the test. He felt humiliation was important for students to experience. He justified his behavior by saying if I was attacked on the street, I would need to be able to handle the humiliation and verbal abuse of the attack. That sounded reasonable. So I bought it. I then put myself on a training program that would guarantee that I would never be in that situation again.

As my martial arts skills improved, as I took better care of my diet, and got enough sleep, I questioned the method used to motivate me into action. As a public school teacher, fear and intimidation as a teaching tool went against everything I believed in. Why was it working? If it was working for me, did that mean there is good reason to use such tactics to motivate students? It didn’t make sense. What was wrong with this picture? The answer became clear a year and a half later.

I changed schools. The Jeckyl & Hyde behavior of my former instructor took its toll over time. I finally stood up to him fearlessly and without regret. For the first eight months in the new school, I would wait for my Sifu to rage, to put me down, to lose control. It never happened. In about the eighth month I realized, for the first time, the long term price I would pay because of my first instructor. I had a hard time trusting. Intimidation and fear had become a part of my pattern of thinking. I was always on guard. In the ninth month, I relaxed somewhat. I finally trusted that I would not be raged at or put down.

Then, I was told I would test. It had been a year and a half since the “test from hell.” The closer I got to the test, the more tense I became. One week before the test, I was experiencing such extreme anxiety that I had difficulty sleeping. I woke up one night to realize Jeckyl & Hyde had invaded my dreams. I now fully understood the price that I paid that year and a half ago when I endured that test. If I didn’t get a grip on myself and resolve what I was feeling, the flashbacks and fear could prevent me from doing well with this test.

I really wanted to do well on this test. There was a key difference in my motivation, however. This difference reinforced my teaching philosophy. This difference explained it all. I was motivated to do well, but not because I feared my Sifu. My Sifu is caring and encouraging. His standards are high, his style traditional, and his expectations clear. He may occasionally raise his voice, but he never puts me down. Any fear I felt, I recognized as residual. It belonged to Jeckyl & Hyde. I wasn’t motivated by fear of punishment. I was motivated because I respected my Sifu and I didn’t want to let him, or myself, down. I knew he respected me. That was the difference. I knew I had made a commitment to do my best when he took me as a student. I was motivated to honor that commitment. If I knew that I did my best, I would feel good about myself, no matter the result.

The test was a positive learning experience. No one yelled. No one was humiliated. Everyone was encouraged. The atmosphere was calm, caring, and understanding. I left astounded at the difference. The experience healed my wounds. It motivated me to work harder, to be better, to be the best I could be. It calmed my fears. I grew as a person. I gained a deeper understanding of my role as at teacher. The lesson would filter into my relationships with others in a positive way.

The behavior problems in schools today prompt many people to say that schools should be more punitive. Punishment as defined by Webster’s New World Dictionary is “harsh or injurious treatment.” Some people advocate corporal punishment. Some teachers use humiliation and put downs to control their students. What these advocates of punitive justice in the schools miss is the long term psychological effects of such methods. Students’ behavior may improve under such treatment in the short term. The motivation is fear. When fear is the motivator, moral development stops, emotional scars are embedded in the soul, and behavior is ‘good’ only until fear can be escaped.

I’m an advocate of caring discipline. Discipline, as defined by Webster’s New World Dictionary is “training that develops self-control, character, or orderliness and efficiency. Could push-ups or consequences be an aspect of that discipline? Absolutely! The difference lies in the presentation of the consequence. If discipline is accompanied by ridicule, is excessively harsh, or unpredictable and inconsistent, it is punishment. Punishment destroys the spirit. Discipline builds character. Self-discipline, the goal of discipline, builds self-esteem.

If I had not had both these experiences, I would have intellectually understood the philosophical arguments for discipline and against punishment, but, my understanding would not have come from an experience that touched me deeply. Experience makes a better teacher. Some adults from my generation, who were often educated in punitive environments, may never have experienced caring discipline. Consequently, these adults would look at the world with the attitude, “If It worked for me, it will work for them.” The emotional scars that result from punishment and ridicule may be repressed, or taken as part of the ‘character building’ process, therefore justified. It is a sad statement about our culture that most adults have never experienced caring discipline. Rather, they’ve endured punishment. Only when you experience both, can you fully understand the difference.

For more information about conflict education and caring communities, see Susan Fitzell’s book, Free The Children, Conflict Education for Strong and Peaceful Minds. Available in both print and electronic versions!